Getting closer to finishing ...

Today after a bit of a false start I got the outside vertical borders sewn on the A2 10-22 quilt which I want to finish by Wednesday at the latest. Below is a photo of the quilt thus far, with the outside horizontal borders ready to start on. I have used an old Army/Air Force green uniform as the background for the borders. 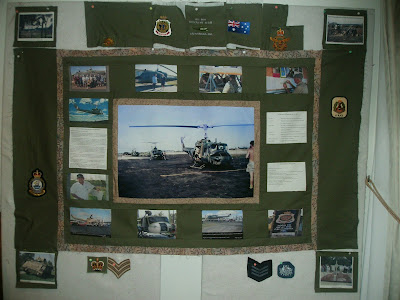 I had a helper today with the work on my quilt ... young Nelson, the miniature schnauzer who we are minding today. Sadly he was more interested in having a "sook" and laying on my lap than actually helping with the sewing! 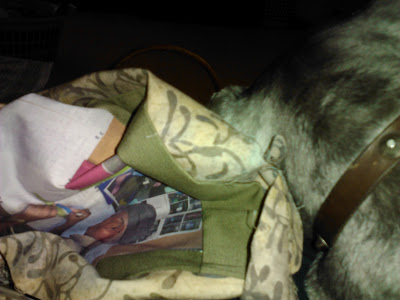 Here's a photo of Nelson looking just so very gorgeous ... 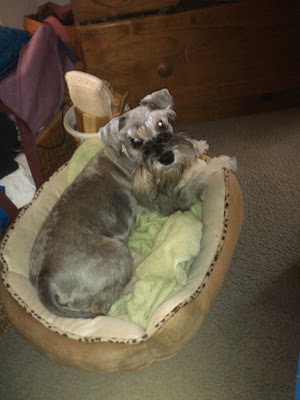 I wonder if Nelson's parents would allow hubby and I to have week-end access to him? He is just such a lovely well-behaved funny dog and loves his pats and nurses on my lap - my kind of dog!
Posted by Bern at 6:47 PM 1 comment:

Finally, finally the inside borders are on the A2 10-22 commemorative quilt! Progress has been slow due to me having to re-size the photos and also because I tend to muck up the unfinished measurement of the photo blocks with the finished measurement! Grrr !!! 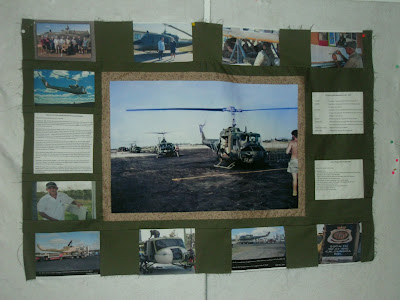 Now to work on the outisde borders which will comprise photos from the Long Tan plantation on the day or soon after the actual battle on August 18. 1966, plus unit badges for 9 Squadron (who flew the chopper to re-supply ammunition  and 6RAR who were the artillery unit battling the Viet Cong). I also am adding the Sub-Branch logo, the Australian flag and a few other bits and pieces.

Unfortunately I won't be able to finish the outside borders until Saturday as a local embroidery company is taking a bit longer than I had expected to do some embroidery of these things Still I can get the corner blocks printed out and also the vertical outisde borders done. I am using actual army and air force green uniforms for the fabric for the outside borders which the Caloundra RSL's Military Museum gave me. It does help that my husband is the Sub-Branch President, sometimes (except when I need him to do things for me at home and he is at the office)!

I am thinking about including some pieced Flying Geese blocks in the outside border to add a traditional touch to the quilt. It all depends on time especially as I still have the quilting to do and that will involve quilting in the ditch and also quilting around the outside of the photos. Hmmm ... looks like a busy week-end ahead!
Posted by Bern at 9:36 AM No comments:

Update on A2 10-22 Iriquois commemorative quilt

Most of yesterday for an hour or so on and off, I spent ringing Barry (my husband, who was on his way to Kilcoy) checking one detail after another, because once something is printed out it has to be accurate. I was working on making up a timeline (which did not exist) of the Restoration Project and on typing up, then re-writing/ updating a bit of the history of the A2 10-22 helicopter (the original of which had been supplied to me). Plus at $4-$5 a sheet, the photo printing fabric is not cheap. So far I have used about $50 worth of these sheets. 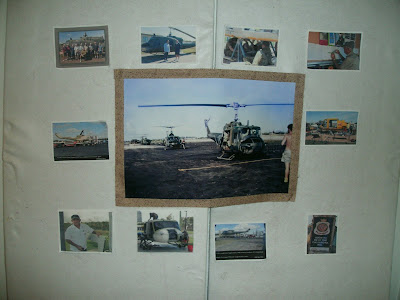 Original layout of the photos surrounding the Iriquois helicopters on the tarmac at Nui Dat, Vietnam 1966

Today was spent sewing additional frames to the top and bottom of the central photo of the Hueys (Iriquois) to extend the vertical side length of the picture (so that all of the photos and text sections would fit down those sides). Then I was measuring, re-measuring and measuring again the photos to go around the central picture.

I have decided that quiltmaking is not just about the designing of the quilt and the sewing but so much more than I had expected about the maths and making sure I am accurate (the area where I tend to make the most mistakes ... vbg ... ). 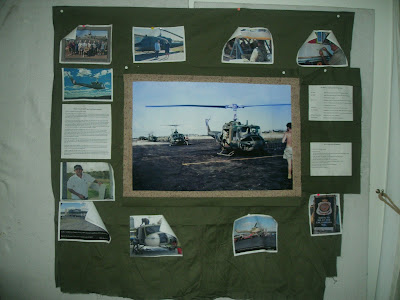 Today I will sew the one finished right-hand side (see photo above ) on to the central picture then work on sewing together the left-hand side. More measuring and trimming of photos.