There wasn't enough room in my profile to explain the spoilt dog in the name of my blog. The spoilt dog refers to my (dear departed) silky terrier, Minnie. Min has been in doggie heaven now for almost four years but I miss her every day. DH and I could not have children together so Min became my surrogate child. 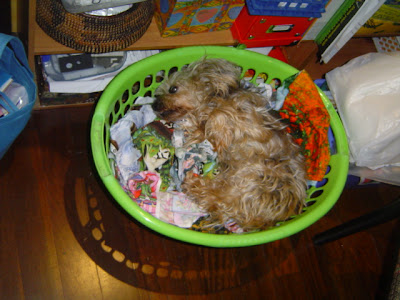 We were livng in Wyandra, 100 km south of Charleville (about 1 000km west of Brisbane) in 1993 and I was  transferred out to Birdsville in far far SW Queensland. Our previous dog Max, a Smithfield cattle dog, had met an untimely end and we were offered the choice of our neighbours silky terrier pups. I went next door and chose Minnie and she was the most fantastic dog one could ever have.

Min was very loyal and lots of fun. Barry was in and out of a wheelchair for the five years following when we were given Minnie and Minnie stayed by his side all the time. Considering that we were living in the Outback where social services are non-existent, Min looked after Barry during the long hours when I would be at school.

Min loved sitting on my quilts when I was trying to sew them and the first two quilts that I made, both log cabins, were claimed by her. The photo above shows Minnie laying in a basket of quilting fabric waiting to be folded. 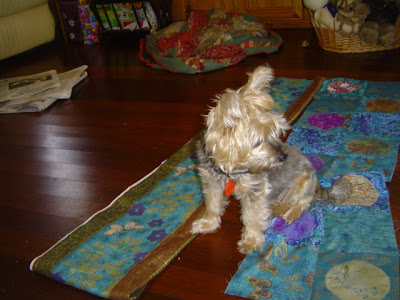 The photo above shows Minnie laying on some rows of a row by row that I was working on and hopefully I shall finish that UFO in the next couple of months!

Here's another photo of Minnie, looking very stressed out - not! And yes, that is more quilt fabric that she is laying on, with a dresden plate quilt in the background. 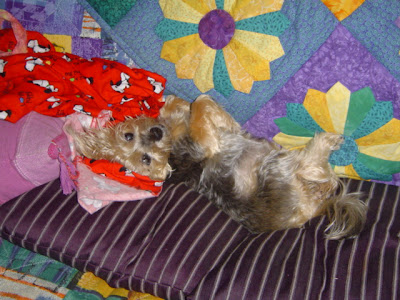 Okay, here is yet another photo of Minnie laying on a teddy bear quilt made for a friend's daughter: 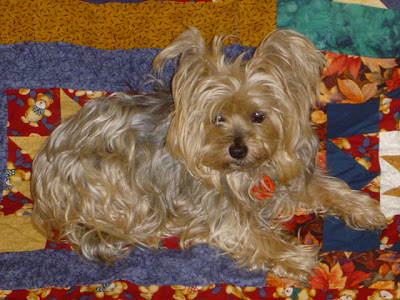 Minnie died of end stage kidney disease, poor little thing. She was one of those dogs with a huge personality and everyone who met her just loved her. I could not do a blog about quilting without including Min, hence the name of the blog. I originally was going to call the blog Killerdog Quilts because an old Aboriginal bloke out in Birdsville nicknamed Minnie Killerdog but someone said to me that that didn't sound like a good name for a quilt design company (which is what I hope to eventually start up), hence the name of my blog now. Old Albert called Minnie Killerdog because she used to bark ferociously at him when he walked past the schoolhouse (where we were living in Birdsville on his way to the pub). Albert's thongs/flip flops used to make a loud noise when he walked past our house so hence Min would bark at him. As she was only small (about 5kg and not even a foot high) she could only bite you up to your ankles, so  the name was a bit of a joke. RIP my little hund (German for dog), Killerdog, mutt, four-legged human ... we called her all sorts of names, most of which she answered to!
Posted by Bern at 9:42 AM 1 comment: