I have to call this post "ANZAC Day memories"  because I am posting this blogpost a month after the actual day itself! So much has happened in this past month, namely a recovery period for hubby and I after ANZAC Day as well as many other things! I refer to April as ANZAC month, because it is not just one day in that month for us, it is much more than that. Hubby (a Vietnam Veteran) is President of the Caloundra RSL Sub-Branch (which organises the local parade and services) and even though arrangements for the next year's ANZAC Day virtually start in the weeks after the current year's ANZAC Day, there are always last minute arrangements to be made in the weeks just before the day itself. For my part, I sell ANZAC Day badges and memorabilia for the RSL Women's Auxiliary and for the Partners of Veterans' Association. I love doing this because one always has some very interesting conversations with people regarding either their service in the Armed Forces or the service of family members.

For overseas readers, ANZAC Day commemorates our ANZAC troops (Australian and New Zealand Army Corp) who landed on the Gallipoli Peninsula in Turkey early on the morning of 25 April 1915 during the First World War (1914-1918).

I came across this poem by Ataturk in 1934, the words of which are inscribed on a memorial at ANZAC Cove in Turkey:


Those heroes that shed their blood
and lost their lives;
You are now lying in the soil of a friendly country.
Thereore rest in peace.
There is no difference between the Johnnies
and the Mehmets to us where they lie side by side
here in this country of ours.
You, the mothers,
who sent their sons from far away countryes,
wipe away your tears;
your sons are now lying in our bosom
and are in peace.
After having lost their lives on this land they have
become our sons as well.
﻿

Now on to some photographs of the later/second service. First here is one of the last remaining Rats of Tobruk, Maurice Buck. Our Rats of Tobruk, most of whom have passed away, are revered all over our wonderful country. 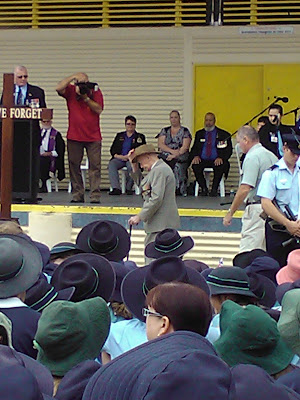 This is a little bit of information about the Rats of Tobruk (quoted from Wikipedia):

"The Rats of Tobruk was the name given to the soldiers of the garrison who held the Libyan port of Tobruk against the Afrika Corps, during the Siege of Tobruk in World War II. The siege started on 10 April 1941 and was finally relieved at the end of November."

My next photo is of a dear dear lady (and member of our Women's Auxiliary) Helen Wilson, who is herself an ex-servicewoman and something like 93 years of age: 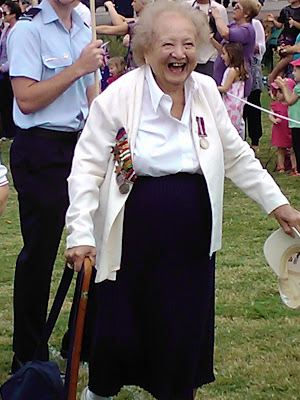 Rarely do you ever see Helen without a smile ...

Here's a photo of 816 Naval Air Squadron who come up from Nowra in NSW each year, specifically for our ANZAC Day services: 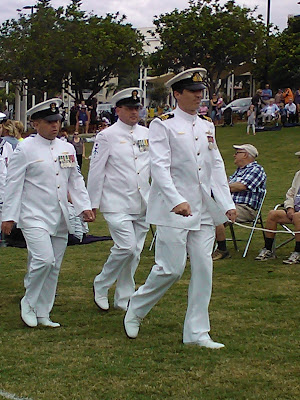 Lastly, here's a photo of more ex-servicepeople marching with our good friend Rod Thimpson (ex Air Force) on the left: 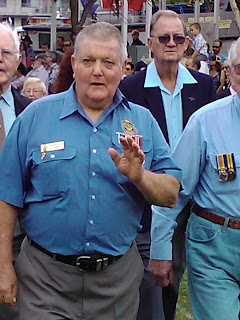 Lest we forget those who gave the Supreme Sacrifice.
Posted by Bern at 1:43 PM 2 comments: