Hubby and I have just come back from lunch with other Veterans and their wives up at the Caloundra RSL. Normally we have our Australia Day celebrations down at Bells Creek (which flows into Pumicestone Passage) but the parks down there are waterlogged after all the rainfall that we have had in the past few days, hence the change in venue. Sadly our annual thong-throwing competition was unable to be held this year. That's the footwear thong, not the underwear thong! There has been lots of conversation on one of my online quilting groups about Aussies getting strange looks when visiting the US when they mention thong-throwing over there!

We are so very lucky to be living in Australia. Even though there are many things that I would change about the country were I Prime Minister, there are so many positives about our country that far outweigh the negatives so I still believe that we are still "the Lucky Country".

Here's some photos of our very beautiful country taken on various trips around Australia: 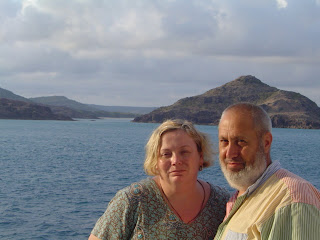 Hubby and I up near Cape York several years ago 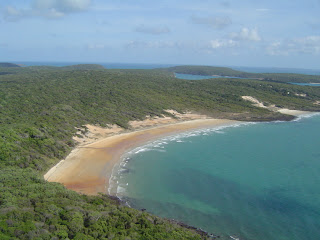 Flying over the northern coast of Queensland 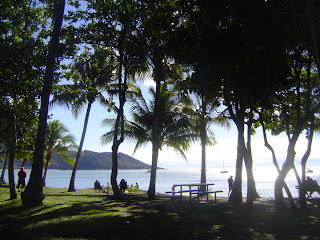 Magnetic Island, off the coast at Tonwsville, Queensland 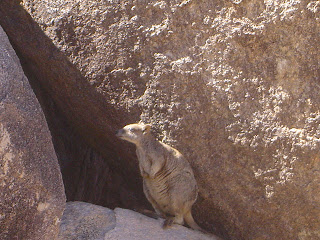 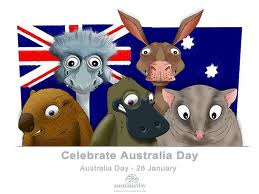 I know a place in Africa: in memory of Karen Blixen - my first UFO finished for 2012

This quilt which I started many years ago now (10+) is finally finished, all bar the quilt label. My good friend Dolly quilted it for me on her Happy Jack quilting machine. Here's a photo of it on my bed. Unfortunately it is not the best photo as our bedroom is not very big and the quilt is a large queen-sized quilt. 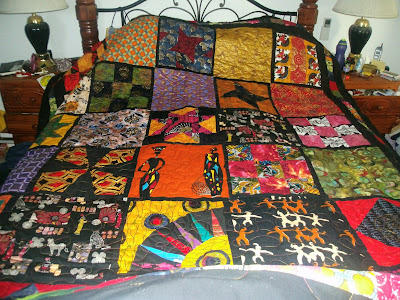 I started off with the following blocks but had to take some out, to keep the colour balance right and then I had to make some extra blocks to make the queen sized quilt that I wanted to make. Most of the blocks that did not make the front of the quilt were added into the backing of the quilt. 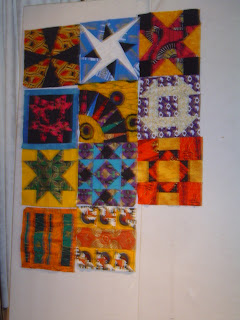 Here's my original bock which I sent out in the block round robin: 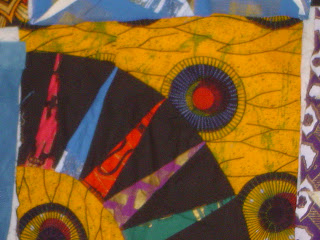 I just love circular blocks of any sort and adore the sunburst block which I have made many times. It is just such a spectacular looking block and one that looks difficult but isn't. This was the original block that I sent on its way in this swap and I am sure some of the swappers were not used to such bright colours. I tired to incorporate other fabrics from the fat quarters that I sent along with my block, so that it would "unite" the other blocks, which for the most part, did happen. I absolutely loved the feature fabric in this block with it sun or eye.

I bought the original African fabrics from a shop in the U.S. called Unique Spool, over ten years ago. Here's their website: http://uniquespool.com/ . I had six or so fat quarters sent to me each month for about a year, selected by the store staff and I still have plenty to make another quilt with.

To make the quilt into a queen size quilt I added in some extra blocks that I made up, as well as some other African-themed fabrics and some batiks which had prints (like the red and green pineapple block print fabric) which suited the African theme of the quilt.

I named the quilt in honour of Karen Blixen, author of the "Out of Africa" book which I read many years ago after seeing the wonderful film of the same name starring Meryl Streep and Robert Redford. I also have a great love of lions, being a Leo and also of elephants and I do collect elephant staues, although not in a huge way - they have to "speak" to me in order for me to take one home with me!

Here's another couple of lovely blocks and fabrics from the quilt. I do so love the colours and the designs! 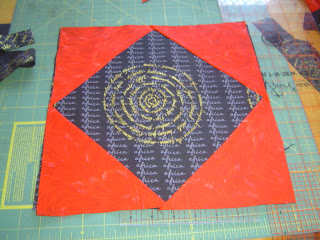 I just love the words in this fabric ... 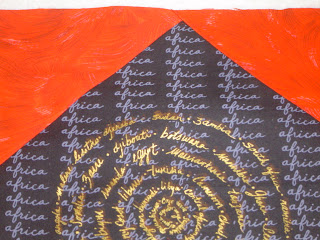 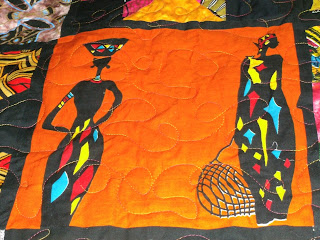 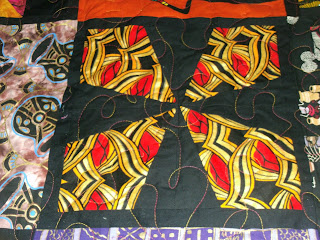 Dolly's quilting looks fantastic on my quilt! Thanks Dolly ...
Posted by Bern at 2:27 PM 1 comment: 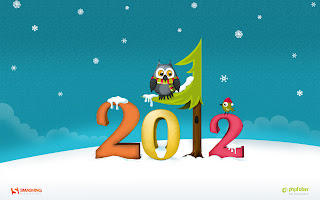 Happy New Year everyone! Let's hope everyone has a great year this year. Last year was one tinged with sadness for hubby and I. We bid farewell to two good friends - both entering the next life due to that devil of an illness - cancer. RIP Joy and Geoffrey ...

I have completed my first finish of the year! I have finally finished the second of the two mug mats which I made for a swap in the MA online group of friends which I am part of. Actually I finshed it over nearly two weeks ago now (just have not had much time to blog ... ) and it (hopefully) should have arrived at Bonnie Jo's home by now (although poor Bonnie Jo is not well at the moment).

This is a photo of the completed mug mat: 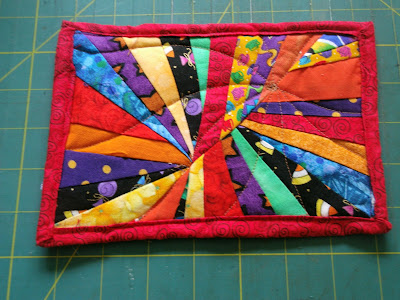 This is only the second mug mat that I have made. I used the tutorial featured on this website:

I do so love anything circular so the starburst design really suited me. I used an old facewasher (flannel I think Americans call them) as my batting as I thought that would be more absorbent. I am quite pleased with how it turned out. Bonnie had asked for bright colours which suits me down to the ground since I just love bright, happy colours.

I actually made two mug mats for Bonnie and I was certain that I had taken photos of the first one, but now that I need it to post on this blog, alas I cannot find it. I shall have to ask Bonnie to E-mail me a photo of that mat when she is better. For that first mat I simply used to very bright orphan blocks, which were tilted squares.
Posted by Bern at 2:09 PM 1 comment: