On 7 & 8 February, hubby, Barry and I took part in the first ever annual Variety Ride 4 Kids. This was run by the Variety Club, http://www.varietyqld.org.au/qld.org.au/ which as many people know, is the children's charity. It was great to be out on our wonderful purple trike again for a long ride. Barry uses the trike regularly for his normal mode of transport and I drive our car, so I don't often hit the road with him. 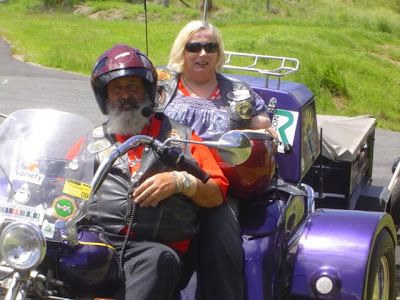 We set off from Macdonald's restaurant at Caboolture, riding through the Sunshine Coast hinterland and then overnighted at Peregian Beach on the coast. The ride was extremely well organised, in fact the most-well organised that we have ever been on. Whenever we stopped, we were given the next set of written directions in terms of turns etc, because with something like 40+ motorbikes (with many riders not being locals) and about 10 support vehicles, somebody is bound to get lost. Suffice to say, that was Barry and I, mainly because we missed a turn-off somehow and the directions, which I had folded up and put in my bike vest, would fly out.


One of the other support riders was trying to get my attention on the back of the trike but, I just so happened to have nodded off to sleep, so he gave up on us! So it was just as well that we were locals, so we were able to help another couple who had also lost the main pack, to find their way to our night's accommodation. 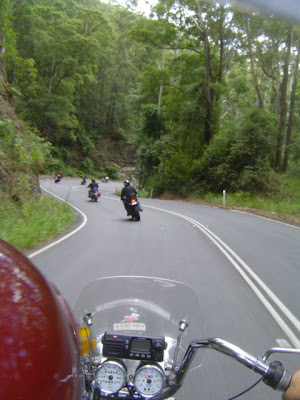 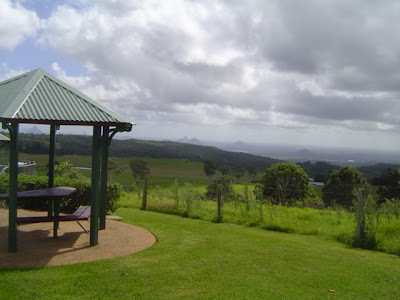 The next day we headed off earlyish (would have loved a sleep-in after a rough night in a very cold room - the air-con was freezing but it was too hot to turn it off and you couldn't adjust it) for more of the open road. We basically rode from Peregian Beach back up into the hinterland again, ending up back at Beerwah Golf Club for lunch and the presentations. 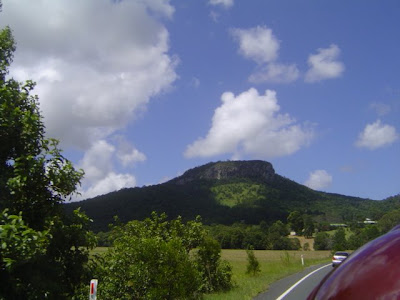 What was astounding was that $10 100.00 was raised throughout the whole week-end, through the fees that riders and their pillions had to pay, by raffles and an auction of various goods, so that was just wonderful! 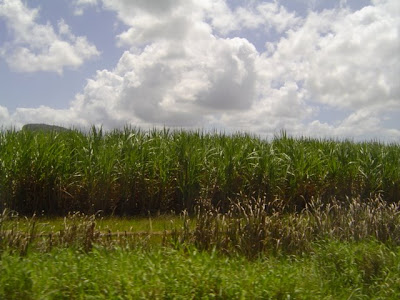 All of the funds raised will go to helping disabled children in the south-east corner of Queensland, providing equipment such as wheelchairs, computers etc for them, which the government often refuse to provide funding for and which their parents can ill-afford. The children and their families are always so touched and humbled by the help that they receive from Variety, that it does bring a tear to one's eyes.

Sadly, it was on the Sunday of the ride that we all read about the tragic bushfires down south, with the newspaper headlines showing the devastation caused. At least we, the riders and pillions that took part in the Ride 4 Kids were able to bring a bit of happiness to a few children's lives up here in Queensland. 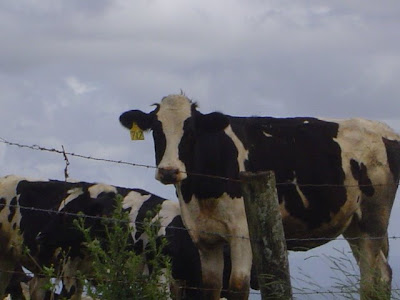 Key to photographs (going down the page):

I haven't wanted to post too much in the past week or so before I posted something about the bushfires down south in Victoria. The last news broadcast that I heard said that 200 people had perished, which is just so sad.

Thankfully as Australians have done for generations, everyone is pulling together and the disaster relief is forging ahead with much-needed funds being donated. Many of my online quilting groups are running quilt drives as is one of our local quilt shops, Kawana Sewing Centre and I am going to donate some quilt batting when I get a chance to get up to that store.

So many positive stories have come out of this disaster but I did want to post a picture of Sam, the koala, whose photo has been sent around the world. This is a link to the website that has been set up to help Sam and other wildlife: http://koalasam.com/

Here is a photo of Sam: 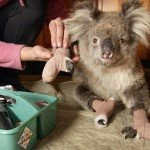 Just when I think I have remembered everything that I wanted to write in the blog, I remember something else. Someone on one of my Internet quilting groups posted this website about a gallery and garden that had been badly damaged in the fires around Marysville. I had never heard of Bruno's Art and Scupture Garden before but this website shows you just what the garden looked like before the fires: http://www.brunosart.com/tour.htm

Here is a photograph of one of the sculptures: 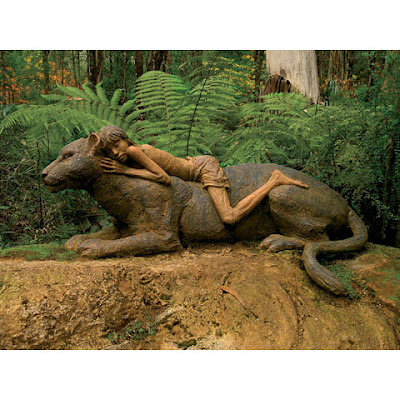 As you can see the sculptures are just stunning! Bruno and his family are going to be working hard at restoring the garden to its original state but no doubt would appreciate support in doing so.

Someone else in one of my Internet quilting groups someone had posted this poem and I thought that it summed up a lot of people's feelings when they look at the countryside around them:

"And Black Is All I See" Written by Mike Claridge of Ararat Victoria.

Where green and gold once cloaked the land

Where eucalypt and pine did stand

Where man did live and lay his hand

Where horses grazed and cattle drank

Where grasses lined the river bank

Where stood a house and water tank

There was a town with store and hall

Now nothing moves or lives at all

And black is all I see

There stood a home and there another

Where lived a daughter, father , mother

A sister, cousin, niece or brother

Our nation grieves and holds them tight

Throughout the darkness of the night

Till daybreak brings an ashy light

And black is all I see 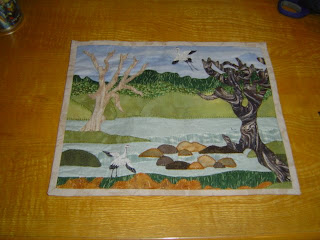 This first block has been hand-appliqued (all in blanket stitch) and was free-hand drawn by me from a photograph of the billabong (lake/waterway) that is right next to the very small isolated town of Birdsville, on the edge of the Simpson Desert in far, far south-west Queensland, Australia. The rains had come, so the bush is lush and green. The birds are brolgas, which are native Australian birds. 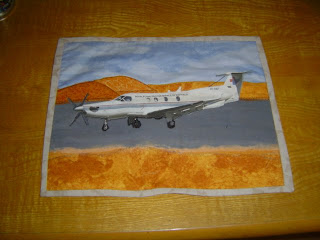 The block above shows one of the Royal Flying Doctor aeroplanes on the airstrip in Birdsville. The Flying Doctor (www.flyingdoctor.net/) provides both regular health clinics to towns and properties in outback Australia and also emergency services and evacuation of patients in need of treatment and is a service necessary to the survival of many in the outback. The Flying Doctor evacuated my husband several times when he developed complications from leg surgery and needed to be flown thousands of kilometres for emergency surgery. 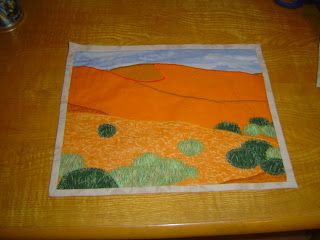 As I mentioned earlier, the town of Birdsville is on the very edge of the Simpson Desert, some 2 000 km from Brisbane on the eastern coast of Australia. Pictured above is a machine-appliqued block depicting one of the many sand-dunes in the Simpson Desert with its spinifex and deep red sand. 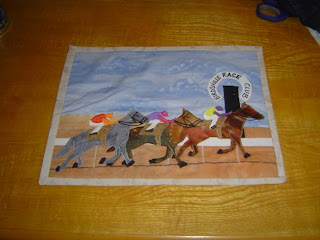 This last landscape that I am posting today (there are two more landscapes to complete the mini-landscapes) shows the very famous Birdsville races. People come from all over Australia (and from other countries) to Birdsville for the Birdsville races which are held on the first week-end in September each year.

The town's population swells from 100 to about 5 000 people in one week! People camp in the campground, in tent cities and those who fly in tend to sleep under their aircraft in tents or swags (mattresses rolled up in a canvas).

My love of Birdsville stems from the 2 1/2 years that DH and I lived out there back in 1993 -1995 when I was the Principal in the little one-teacher primary (elementary) school out there. There is a saying that once you cross the Diamantina (River) that you will always come back and that we did, back in 1998 when DH and I flew back for the centenary of the school. We were welcomed back with open arms and it felt like we had never left! It was so lovely to catch up with old friends and to see just how much my former students had grown. 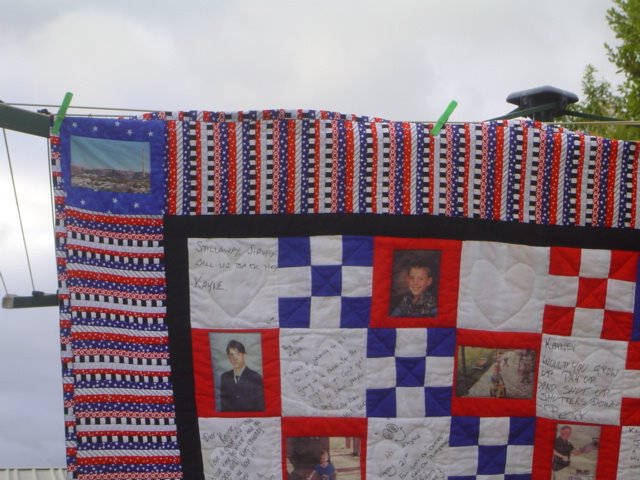 Despite moving house last year I did manage to finish a memory quilt called "Kayne's first 21 years", which I made for the son of dear friends of ours, part of our ex-Mt Isa "mob" as I call them. At Kayne's 21st birthday party everyone was given a signature square (siggie square) and asked to write a message on it with a black permanent marker.
After a lot of research (ordering special edition quilting magazines and books in from the United States on memory quilts) I eventually came up with my own design. I chose the red, white and blue colourway because Kayne is a very patriotic young Australian fellow and because he has a tattoo on his back of the outline of the Southern Cross constellation of stars (which feature on the Australian flag) on his back. Now, that is patriotic!
Kayne's family is very close and I had so many family photographs to choose from, that is was hard to leave any out. The photos in the corners and along the borders of the quilt (staggered to avoid being creased when the quilt was folded) are all of places where Kayne has lived: Mt Isa, Gracemere, Wondai, Perth and Caloundra.
It took me ages to make the quilt for Kayne ... a bit over two years and I felt guilty every time I would see Kayne or his parents. At least for a while I could blame the house move ...
I added a "God square" to the quilt, because both Kayne's mother and I are religious (well, in my case, not so much religious as a "pray-er", I can't say that I go to church). So I followed what I understand of the Amish tradition of deliberately adding a "mistake" square into the quilt. Their belief, from my understanding, is that only God makes perfection.
On the right-hand side border, I quilted in the Soutern Cross constellation of stars in reference to Kayne's tattoo, which I thought added a nice personal touch to his quilt. 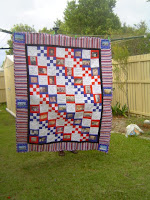 Kayne is now 23 years old and I gave the quilt to him just before last Christmas. I wasn't too sure how Kayne would like his quilt, but I need not have worried, as Kayne just kept on repeating, "Oh, I did not think that it would be as good as this!" And then, he would apologise to me for thinking that! But ... I understood what he meant!
One of the reasons, well, really the main reason why the quilt took me so long to make was that I suffer tremendously from a lack of confidence in my own work. I can picture in my mind what I want my finished quilt or piece of work to look like but then it is translating it into the finished piece of art that I have problems with. I constantly doubt my ability to translate what is in my mind into reality! I can be like this with a quilt or piece of quilted art for weeks or months or even years! I wonder how other quilt artists deal with this lack of confidence ...
Posted by Bern at 1:26 PM 4 comments: